Ann Magnuson to host Halloween events in Charleston and Lewisburg

Charleston native Ann Magnuson will host a pair of very special Halloween events that will feature her performing spooky songs and stories in a style that she has dubbed “SurRURALism.”

Produced by Magnuson and The West Virginia Music Hall of Fame, an October 29 show at 7:30 p.m. will bring her troupe to Carnegie Hall in Lewisburg. The following afternoon, there will be a free show at The West Virginia Museum of Music in The Charleston Town Center (3-5 p.m.).

Mixing the oddball glamour of Salvador Dali’s Surrealism with the woodsy weirdness of Appalachian folklore, Magnuson teams up with West Virginia Music Hall of Fame Director Michael Lipton and local musicians to conjure up songs and spoken word dreamscapes from her extensive musical and theatrical catalogue.

In addition to tunes from her former bands Bongwater and Vulcan Death Grip – as well as her many solo albums – Magnuson will premiere a brand new song, “Ghost Cat,” which features shout outs to beloved West Virginia apparitions such as Mothman and The Flatwoods Monster.

Magnuson said that, growing up in Charleston, Halloween was always her favorite holiday. “My grandma often handmade my costumes,” she said. “I suppose it was inevitable I would get involved in the theater because I loved dressing up and becoming different characters.”

“Part of the fun was being with hundreds of other kids all reacting together in fear and raucous fun,” she said. “I’m going to encourage audience participation in these Halloween shows as we conjure up ghostly memories of West Virginia during this spooky season.”

“I’ve always loved the weirder aspects lurking in the wild and wonderful woods of West Virginia,” she added, “especially at night when you can feel a special kind of nocturnal magic – not to mention Moonshine – in them thar hills. And I was always entranced by the spine-tingling ghost stories told around the campfire.”

Magnuson said that all of those things influenced her work as a creative artist. “Whether it be in musical song, spoken word or visual art, it’s all a form of storytelling and I was always encouraged during my upbringing in West Virginia to tell stories in fun, imaginative ways.”

In addition to the spooky songs and stories about ghosts, aliens and Ouija Boards, the evening will also include a Q&A. Moderated by Michael Lipton, the discussion will trace Magnuson’s roots from West Virginia to New York City (where she ran the now infamous Club 57 and rubbed elbows with Keith Haring, Jean-Michel Basquiat and Andy Warhol) to London (where she co-starred with David Bowie in the horror classic The Hunger) and eventually to Hollywood where she’s enjoyed a long career as a film and TV actress (recently appearing in Star Trek: Picard as Star Fleet Commander Admiral Kirsten Clancy). 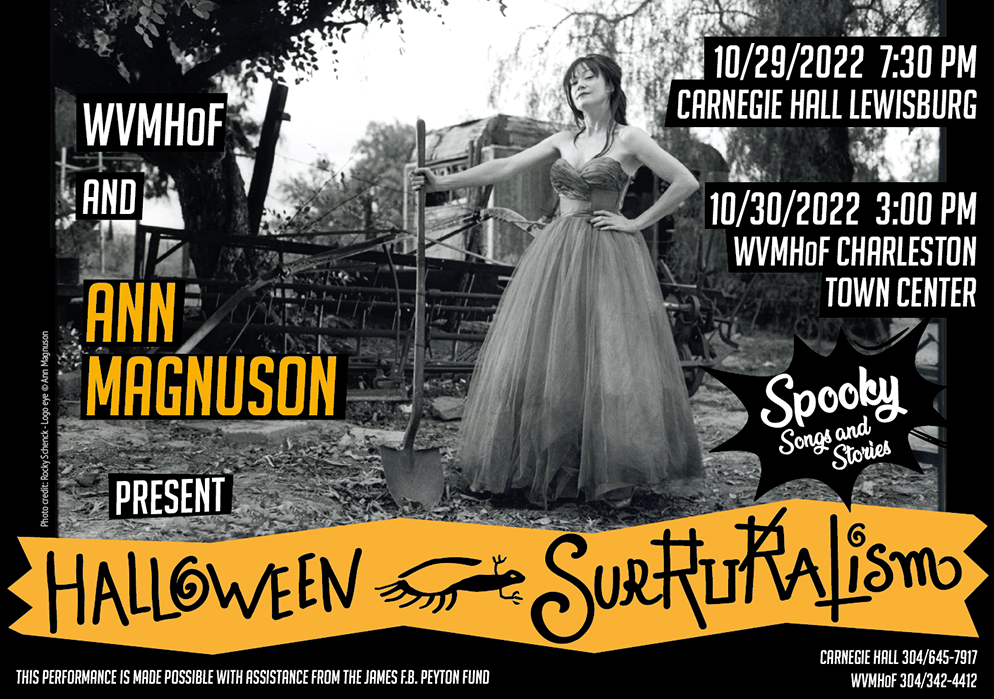