Listen to the My Three Sons theme

While Frank DeVol was never a household name, during the 1960s, his theme music for TV series like My Three Sons, The Brady Bunch and Family Affair came into millions of American households every week. As a bandleader and arranger, he was one of the busiest working musicians of the 1950s and 1960s, and as a composer, he scored more than 50 movies. DeVol was born in Moundsville and raised in Canton, OH, where his father was bandleader for the local vaudeville theater. By the age of 14, DeVol had joined his father’s band at a local theater and was already a member of the musicians’ union, playing violin and piano.

After a variety of gigs, he was hired by Horace Heidt to play and arrange, but when guitarist Alvino Rey left that band, DeVol went with him. By the early 1940s, DeVol was leading his own band on Mutual Network station KHJ in Los Angeles. He soon became musical director for the network, working with Rudy Vallee, Dinah Shore, Jack Carson, and others, and was appearing himself in some of the on-air skits.

DeVol worked in radio until the early 1950s, when director Robert Aldrich hired him to score a low-budget movie, World for Ransom. The score earned DeVol the first of five Oscar nominations he would receive over the course of his career. Alrich used him on several subsequent movies including The Dirty Dozen, Hush…Hush Sweet Charlotte, Flight of the Phoenix, The Longest Yard and All the Marbles. His other movie scores included Guess Who’s Coming to Dinner and the ’50s romantic comedy Pillow Talk – both nominated for an Oscar for music, as well as Murder, Inc, Herbie Goes to Monte Carlo and The Happening (he co-wrote the title track which was recorded by the Supremes). In his spare moments, he did occasional acting bits, appearing in movies such as The Parent Trap. DeVol also recorded many albums of pop standards and salutes to American songwriters as a bandleader in the 1950s.

In 1977, he played the bandleader Happy Kyne on Martin Mull’s talk show parody sitcom, Fernwood 2 Nite. In the mid-1980s, after the death of his first wife, DeVol married the big band-era singer Helen O’Connell, and together the couple performed on cruise ships for several years until O’Connell’s death in 1997. 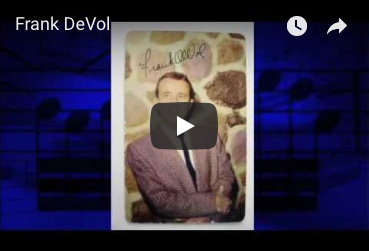